Lovely recipes on how to make homemade chocolate ice cream. Various luxury recipes that chocolate lovers will find easy and simple to make with or without a machine or maker.

Melt the chocolate using one of the methods in cooking tips. Set aside to cool.

Continue to cook the combined milk and egg mixture in the saucepan over a very gentle heat, stirring continuously with a wooden spoon. The mixture will thicken (as this is basically a custard; when it gets thick enough to coat the spoon and leave a trail as you draw your finger across the back of the spoon, the mixture is ready. Do not let it get too near to simmering, as it will curdle.

Stir the chocolate into the custard and strain into a bowl through a sieve. Chill until cool. Then fold in the whipped cream. Freeze the mixture in an ice cream maker or in the fast freezer until set. Approximately three hours should do it.

If you want to make this basic, quick and simple recipe a bit more sophisticated, try this chocolate praline recipe:

Make the praline for this ice cream recipe using the Almond Praline recipe at the bottom of the frosting-icing page. Then, before the mixture has set, stir in 100g of the praline mix, and return to the freezer.

Melt the chocolate with six tablespoons of the milk, - see melting tips, - and set aside.

Pour the rest of the milk into a heavy-based saucepan, add half the sugar, and slowly (on medium heat) bring to the boil.

Meanwhile beat the three eggs with the remaining half of the sugar until the mixture is pale and thick. As the milk comes to the boil, pour the milk over the whipped eggs, slowly and steadily in a stream, beating continuously.

Return the combined mixture to the saucepan and stir slowly with a wooden spoon over a medium heat, until the custard thickens just enough to coat the back of the wooden spoon and your finger leaves a trail as you draw it across the back.

Do not let the mixture come to the boil or else it will curdle.

Remove from the heat and whisk in the melted white chocolate. Leave the mixture to cool in an iced water bath to speed the process.

Freeze the cold mixture in an ice cream maker or in the fast freeze section of your freezer. Store in the freezer. 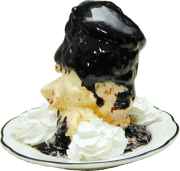 If using the vanilla pod, split it to reveal the seeds and place in a heavy-based pan with the milk and chocolate together. Heat gently until the chocolate has melted. Increasing the heat under the pan, bring the mixture almost to the boil. Remove from the heat, set aside covered, and let the flavours infuse for about 20 minutes.

Beat the egg yolks and sugar together in a bowl until well blended. Stir in the milk mixture, and then strain back into the saucepan. Heat the custard over a gentle heat, and keep stirring to avoid lumps. Do not allow the mixture to boil or it will curdle. The mixture will thicken; when slightly thickened pour into a bowl and allow to cool.

Whisk the cream into the cold custard mixture. If using the vanilla essence add that now.

Freeze the mixture in an ice cream machine, or if you are making by hand you can follow the process described here to make a smoother ice cream finish:

Freeze in a non-metallic container. After three hours place in a bowl and mash with a fork or flat whisk to break down the ice crystals. Work quickly; do not let the it melt too much. Allow to refreeze for another two hours, then repeat the mashing process again. On the second mashing, add any further ingredients like the chocolate drops or chips. Refreeze again for three hours, then eat and enjoy!

Pour the milk into a heavy-based saucepan and bring almost to the boil. Meanwhile, melt the chocolate and the liqueur, using the double bowl method, but check for other methods on the cooking tips page. Beat the eggs and sugar together until well blended. Stir in the milk and strain the combined mixture back into the pan, placing the pan on a gentle heat to thicken the mixture, taking care not to let it boil.

Remove the thickened custard from the heat, stir in the chocolate-liqueur mixture until evenly mixed, then pour into the bowl and allow to cool.

Whisk the cream into the cooled custard mixture. Freeze the mixture following the process for the double chocolate ice cream recipe, or use an ice cream machine.

Place the chocolate into a bowl. Pour the milk into a medium heavy-based saucepan and add the vanilla pod. Heat slowly over a low heat stirring frequently, until the milk is fairly hot, then remove from the heat, cover and leave to infuse.

Put the egg yolks into a bowl and add the sugar and mix well. Add the now warm milk and mix thoroughly. Pour the mixture into the saucepan and stir over a low heat until thick enough to coat the back of a wooden spoon. Do not overheat or the mixture will curdle.

Remove the pan from the heat, remove the vanilla pod, pour the thickened custard into the bowl containing the chocolate, and stir until mixed and smooth.

Allow to cool, then cover and chill thoroughly. Place a bowl and a whisk to chill too. When chilled, pour the cream into the bowl and whisk thoroughly until soft peaks form. Then stir this into the chilled chocolate custard.

Pour into an ice cream maker and churn until frozen. Alternatively, follow the hand making process as described in the double chocolate recipe above.

The luxury chocolate ice cream can have sophisticated ingredients added for dinner party desserts. Some ingredients include the praline mix, chopped chocolate, or unsalted pistachios. For a rich mocha ice cream use three tablespoons of crushed coffee beans, and use in the recipe where you would infuse the vanilla in the warmed milk at the beginning.

Another fantastic ingredient that makes a lovely sophisticated ice cream is to chop 100g of pecan nuts into large pieces, then coat with maple syrup and bake gently for ten minutes until roasted golden. Use five tablespoons of maple syrup instead of sugar when whisking up with the egg yolks in the bowl. This is a delicious ice cream to have with chocolate brownies.

Yes, you can turn your interests into a really successful internet business? Click here and find out how! ©best chocolate recipes online.com Copyright Material 2006-09 All rights reserved

Yes, you can turn your interests into a really successful internet business? Click here and find out how! ©best chocolate recipes online.com Copyright Material 2006-09 All rights reserved